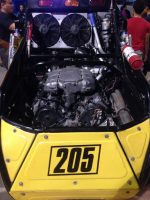 Dinner at Bandidos and Baja Grand Prix street scene. Bandidos is a burger joint, La Paz’s version of American Graffiti with outdoor tables, a grill made out of the engine and hood of an old Chevy, and American blues and rock music from the 1950s-1980s (mostly the early 1960s). Charlie’s Mexican classmates swear it’s the best place for burgers, so of course that’s what I had to get. Mistake. Their burgers are topped with plasticized American cheese – plastic wrapping still on? – which mades them close to inedible but not too close when you’re really hungry.  After dinner we walked along the Malecón where hopped-up dune buggies were displaced, apparently in advance of the Baja Grand Prix.