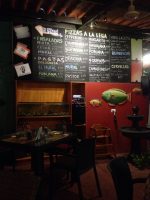 Dinner at El Mural – currently the #1 ranked restaurant in La Paz, according to TripAdvisor with 14 five-star reviews.  I didn’t want to be the first to downgrade it because the people who run it are so nice and the interior is charming. But between friends, it’s very medicre, and that would be kind. The Margarita pizza featured La Paz’s universally tasteless tomatoes and a not very exciting cheese. The house pasta was even more disappointing. Of course, being an Italian I have high standards for Italian food, but I don’t think El Mural is anywhere close to as good as Il Rustico.