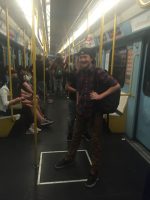 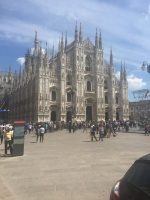 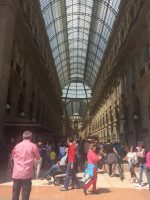 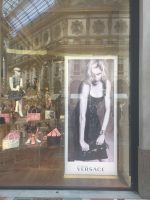 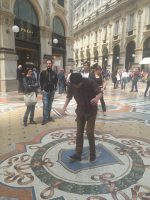 Spinning on the mosaic bull’s balls and other experiences in Milan:

One of the strangest traditions in Milan is spinning on the bull’s balls in the Galleria Vittorio Emanuele II. Situated directly across from the Duomo, the galleria is the city’s second place of worship. A temple of fine shopping and outdoor cafes, where you can see and be seen in true Milanese fashion.

It is known locally as ‘il salotto buono’, the fine drawing room, given its role as the main evening passeggiata (strolling) route. Built in 1877 by Giuseppe Mengoni, its soaring iron-and-glass structure, cruciform plan and churchlike proportions were designed to celebrate the new industrial Italy, one with more secular concerns such as business, fashion and high finance.

Unfortunately, Mengoni plummeted to his death from the scaffolding just weeks before the 14-year project was completed. So, to avoid similar bad luck tourists and Milanese alike head for the mosaic of the dancing bull (said to mark the spot where he fell) to grind their heels firmly into its testicles.

The proper way to do it (as shown by the first spinner in the video below) is to place your heel firmly in the bull’s groin – just look for the worn patch! – and turnbackwards three times. Many people get it wrong, twirling forwards instead, but we can’t guarantee that, that will ward off the bad spirits.