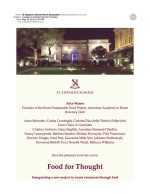 Cocktail party at Casino dell’Aurora Palazzo Pallavicini, a mind-blowing palazzo in the heart of Rome with renaissance era art and sculptures, more ancient statues and friezes, and architectural elements reminiscent of another time and place:

The Pallavicini Casino dell’Aurora stands on the Quirinal hill, inside the wonderful architectural complex of Palazzo Pallavicini Rospigliosi, once the seat of the magnificent Baths of Constantine.

The Casino dell’Aurora is a jewel of early 17th century Roman baroque, had built by the Flemish architect Giovanni Vasanziofor Cardinal Scipione Borghese over the ruins of the Baths of Constantine. Its windows look out directly onto Piazza del Quirinale and the Fontana dei Dioscuri and three big glass doors open onto the hanging garden of about 2,000 sq.m..

Just as envisaged by the original customer, it is still the site of important events such as meetings, concerts, conferences, receptions, business meetings, formal luncheons and exhibitions of various kinds. The customers, very select and increasingly frequently international, include multinational companies, financial institutions, oil and insurance companies, State bodies, medical, tourist and cultural associations. The exceptional beauty of the garden has been the unforgettable setting for concerts of classical music, high-fashion parades and cultural events.

The pavilion, with a total of 220 sq.m., consists of a central hall, beautifully frescoed by Guido Reni with the chariot of Aurora, as well as by Cherubino Alberti, Paolo Bril and Antonio Tempesta, and two side halls, also frescoed by Giovanni Baglione and Domenico Cresti, known as “il Passignano”, where some paintings from the wonderful Pallavicini collection are kept. There are also marble busts and valuable sculptures.

The Casino dell’Aurora is a loggia that cardinal Scipione Borghese had built (1612-1613) by the Flemish architect Giovanni Vasanzio. The architect succeeded in achieving a perfect balance between the architectural structure and the lavish decoration of the façade. It is characterised by slabs from Roman sarcophagi of the 2nd and 3rd centuries A.D., which recount ancient mythological tales linked to the subject of love-death and the immortality of the soul. The central part of the façade is enhanced by big windows, which create charming transparency between outdoors and indoors and open onto the big central hall with its ceiling decorated with the magnificent “L’Aurora” fresco.

The same room holds other beautiful frescoes: il “Triumph of Fame” and the “Triumph of Love” by Antonio Tempesta, the Cardinal’s coat of arms and Cherubino Alberti’s putti, the “Four Seasons” by Paul Bril, seventeenth century marble busts and sculptures from the Roman era, including the famous “Artemis the huntress” and the “Rospigliosi Athena”. The ceilings of the two side halls are frescoed by Passignano with the “ Battle between Renaldo and Armida” and Baglione with the “Tale of Armida” and some paintings from the wonderful Pallavicini Collection are still kept there.

As remarkable as the location and other elements of the evening – the white-gloved service, the glamorously dressed Italian couples, the stalactites in the fern-covered grotto – the food was not. It was fortunate for Alice Waters that her plane was late and she therefore unable to attend, for she missed having to suffer through tasteless tomatoes and rubbery mozzarella, grainy quinoa, bland pasta, and sundry other unidentifiable carbohydrates in plastic cups with plastic spoons. One would have thought that the food at an “Food for Thought” event might have a bit more thoughtful. Alas, not.