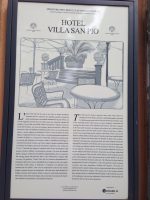 Last cappuccino with Uncle Frankie at Hotel Villa San Pio, “in the heart of the Aventino, an intimate and exclusive area, characterized by wide, green spaces and turn-of-the-century refined architectures, within a context risen about high profile religious and urban centres, such as the basilica of Santa Savina and the adjacent Giardino degli Aranci and the square inspired by Piranesi and named after the Knights of Malta.” The neighborhood of Trajan and Adriano before they became emperors. “The Villa San Pio Hotel sums up magnificently the area’s prerogatives, such as the quietness which envelopes its guests, part times atmosphere, tradition and elegance.” The Italian translators have such a way with English words.