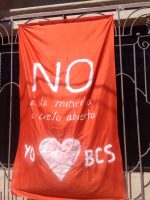 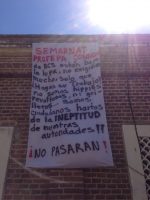 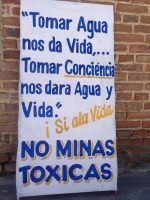 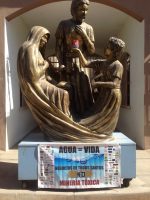 Signs and banners around Todos Santos in opposition to Los Cardones, an open-pit, gold mine proposed

… on the edge of the Sierra de La Laguna Biosphere.

The Sierra de La Laguna Biosphere is recognized by the United Nations Education, Scientific and Cultural Organization (UNESCO) as a world biosphere. It is a mountain range that lies at the southern end of BCS. It is home to distinctive flora and fauna and has many endemic species and subspecies.

The Sierra de la Laguna is the source of groundwater for a large part of Baja California Sur. Contaminated drinking water is not the only concern for those against gold mining in the area. The water is also used for agricultural irrigation and water for cattle.

For more information about mining in Baja California Sur, see www.defiendelasierra.org and www.frenteaguayvida-bcs.org.