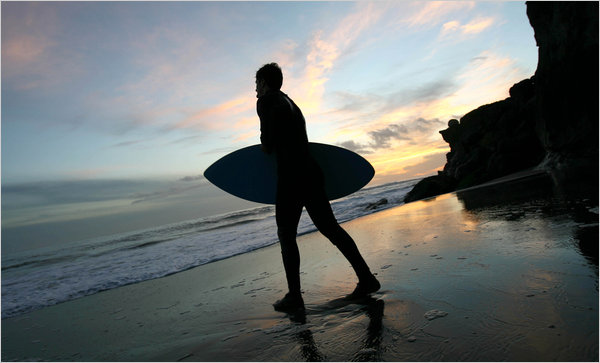 A lone surfer on the beach. More Photos »

FORGET what you heard about Santa Cruz being the city that sleeps. Yes, this sunny coastal town still has its countercultural wackiness. You can still watch surfers shred waves, ride a seaside roller coaster on the Santa Cruz Beach Boardwalk and hear a street musician singPink Floyd’s “Goodbye Cruel World.” But Santa Cruz has been stirred by the tech boom in nearby Silicon Valley. In the past, “rabid localism” meant getting a black eye at the Stockton Avenue surf break. Now, the term refers to the restaurant that uses eggs from its own chicken coop, and the woman who churns organic ice creamwith fennel foraged from a nearby field. And sleek lounges offer reasons to stay up until 2 a.m., an eternity by old Santa Cruz standards.

A Weekend in Santa Cruz

Once the domain of seedy bars and bong displays, the southern section of Pacific Avenue is now a more fashionable strip where the city’s lust for vintage is on display. Idle Hands Dry Goods (803 Pacific Avenue; 831-466-9305; idlehandsdrygoods.com) feels like an updatedRolling Stones track, melding vintage American outlaw looks (cowboy boots, belt buckles) with rock-’n’-roller attitude (graphic T-shirts, Pendleton shirts). True Love Antiques & Vintage (805 Pacific Avenue; 714-847-3961), is a wonder cabinet of curios, art and odd-ends. And on nearby Cedar Street, MetaVinyl (320 Cedar Street; 831-466-9027; metavinyl.com) carries new and old LPs, turntable gear and rare finds, like a mint-condition copy of 2 Live Crew’s “As Nasty As They Wanna Be.”

The staid dining scene in downtown Santa Cruz got a jolt this fall with the arrival of Laili (101B Cooper Street; 831-423-4545; lailirestaurant.com), a stylish Afghan restaurant. With its nattily dressed waiters, soaring ceilings and wall-size photo display of precious Afghan jewelry, this is no hole-in-the-wall kebab joint. A cross-section of Santa Cruz can be found on a given night, sampling Persian chive-stuffed Aushak dumplings ($9) and the braised lamb shank with kabuli rice and yogurt ($16). Ask for a seat at the communal table, where you can rub elbows with surfers and techies, and watch a cook in an open kitchen preparing naan dough with a giant rolling pin.

The spiciest spot downtown is arguably the weekly salsa dance party at the historic Palomar Ballroom (1344 Pacific Avenue; 831-426-1221; palomarballroom.com), where dancers swirl in tight dresses, miniskirts and high heels. If you know your salsa moves, pay $5 at the door. If you need to brush up, a $10 fee covers a salsa class and the dance party.

A crimson glow beckons late-night patrons upstairs to the Red Restaurant & Bar (200 Locust Street; 831-425-1913; redsantacruz.com), a curiously dark lounge with hidden nooks that stays open until 2 a.m. Unless you sit by the fire, reading the menu can be a challenge, so try the Winnie ($7.75), a house-infused rose tea vodka with fresh lemon and simple syrup. Don’t confuse this spot with the Red Room, which occupies the floor below and is a rite of passage for college students.

Stock up for an outdoor picnic along the scenic coastline. True to its name, the Buttery (702 Soquel Avenue; 831-458-3020; butterybakery.com) specializes in butter-rich comfort foods like lemon cheese pockets ($2.65) and blueberry muffins ($2.65). It also sells French baguettes ($2). Round out your supplies across the street at Shopper’s Corner (622 Soquel Avenue; 831-423-1398; shopperscorner.com), a local institution with a neon clock, localwines, hard cheeses and tapenades.

Once home to a frozen vegetable processing plant, the Swift Street Courtyard (402 Ingalls Street) has been transformed into a kind of epicurean food court. The bittersweet Black IPA ($4.50) is a specialty at Santa Cruz Mountain Brewing (Suite 27; 831-425-4900;santacruzmountainbrewing.com), an organic microbrewery with a tiny tap room. If you’re hungry, order a platter of fish tacos ($12.50) delivered to the bar from the shop next door, Kelly’s French Bakery (831-423-9059; kellysfrenchbakery.com). Or, if you want to sample biodynamic wines, head to the tasting room at Bonny Doon Vineyard (328 Ingalls Street; 831-425-4518; bonnydoonvineyard.com), where a metal spaceship hovers overhead. A $5 flight of wine tastings includes a white Spanish varietal called albariño and a dry muscat, both made from Monterey County grapes.

At La Posta (538 Seabright Avenue; 831-457-2782; lapostarestaurant.com), the flavors might hail from Italy, but the ingredients are local. This handsome restaurant, which opened four years ago in a former general store, draws locavores to the hushed neighborhood of Seabright. Examples of its farm-to-table ethos include the ortiche brick-oven pizza ($14) with wild nettles foraged at Route 1 Farm in Santa Cruz, and an escarole salad ($8) topped with a boiled egg that comes from the chickens out back.

With its large college population, Santa Cruz has long been a hub for indie music. One of the best spots to hear live music is the Rio Theatre (831-423-8209; 1205 Soquel Avenue;riotheatre.com), a former movie house from the 1940s that reopened 10 years ago as a concert hall and features acts like Neko Case and Cat Power. Another reliable option is the Crepe Place (1134 Soquel Avenue; 831-429-6994; thecrepeplace.com), a small venue housed in a century-old Victorian building, where acts such as Erin McKeown and the cult favorite Dan Bern perform under the original stamped-tin ceiling.

After ordering a butter-slathered hot cinnamon roll ($2) at Linda’s Seabreeze Cafe (542 Seabright Avenue; 831-427-9713; seabreezecafe.com), walk to nearby Seabright State Beach (East Cliff Drive at Seabright Avenue), a long stretch of tan-white sand, with a midget lighthouse, a foghorn and a cave. The Municipal Wharf (21 Municipal Wharf; 831-420-6025; santacruzwharf.com), a large pier built in 1914 that draws fishermen and pods of barking sea lions, is nearby. Don’t trust your eyes: that set of “islands” is a fog-bound stretch of coastline.

Two scoops of celery raisin ice cream? You won’t find that in the freezer case of the local supermarket, but it is among the eccentric flavors that are dreamed up at the Penny Ice Creamery (913 Cedar Street; 831-204-2523; thepennyicecreamery.com). The artisanal ice cream shop, which opened in late August in a former hair salon, changes its menu daily, so you never know whether it will have familiar options like rum raisin and dark chocolate, or whether Kendra L. Baker, one of the owners, has come up something nutty, like black sesame ice cream or mandarin creamsicle.

The nearest major commercial airport to Santa Cruz is in San Jose, about 45 minutes away by car.

The Santa Cruz Dream Inn (175 West Cliff Drive; 831-426-4330;dreaminnsantacruz.com), which reopened in 2008, is the city’s lone beachfront hotel, with a 1960s retro theme and Jetsons-style furniture. All 165 rooms have ocean views and private balconies, with rates starting at $179.

Made of sun-baked bricks, the Adobe on Green Street (103 Green Street; 831-469-9866; adobeongreen.com) is a four-room bed-and- breakfast that opened in 1999. It has a dahlia garden, giant birds of Paradise in front and old-timber floors, with rates from $119 weekdays, $189 Friday and Saturday, including a continental breakfast.

The new Pacific Blue Inn (636 Pacific Avenue; 831-600-8880; pacificblueinn.com) is an unfussy bed-and-breakfast with a leafy patio and hot breakfasts made to order. The nine rooms start at $168.

A version of this article appeared in print on January 2, 2011, on page TR10 of the New York edition.

Get Free E-mail Alerts on These Topics

This entry was posted in Travel by mdelapa. Bookmark the permalink.