NASA – How Hard Are We Pushing The Land?.

Grow Text SizeShrink Text Size
How Hard Are We Pushing The Land?

We may be becoming an ever more technologically advanced society, but we remain as dependent as ever — if not more and more so — on the natural world that surrounds us.

That is one takeaway from new NASA research that has found humans are using an increasing amount of the Earth’s total land plant production each year for food, fiber, building and packaging materials and biofuels. 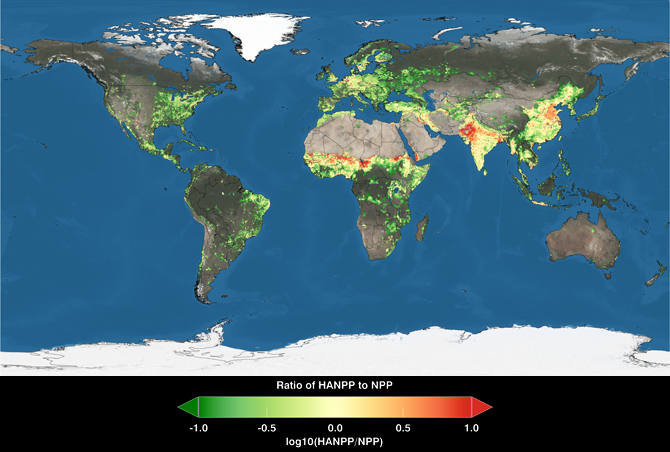 This remains a young data record, as one of the first global measurements tied to satellite data was published in 2004. That baseline-setting measurement was for the year 1995, when humans needed 20 percent of all plant growth for our various products. But the early returns are in, and despite uncertainties in the measurement, the signal is headed in a clear direction: up. From 1995 to 2005, global annual plant consumption rose from 20 percent to 25 percent of all plant production in those years.

As the human population continues to grow and more societies develop modern economies, this rate of consumption is increasing both as a whole and on a per capita basis globally, a NASA research group led by Marc Imhoff at NASA’s Goddard Space Flight Center, Greenbelt, Md., has found.

The group has also used NASA satellite data to produce a multi-decadal record of plant production (from 1982 to 2007) that establishes a baseline of the Earth’s productivity. But it is the consumption data, estimated from UN Food and Agriculture Organization country profiles, that reveals a snapshot of how much pressure human consumption is putting on the landscape. These new findings are being presented at the American Geophysical Union’s Fall Meeting.

The first data point that jumps out from the research is the increase in demand for plants, from ’95 to ’05, from 20 percent to 25 percent. Imhoff said that scientists think this is a significant rise for that period of time, but that part of the challenge of this research is determining the limits of ecosystems’ production and the impacts of a rising consumption rate.

“The question is, ‘How hard are we pushing the land?'” Imhoff said. “People are wary about that percentage creeping up. Most people consider that a high number, although we’re still doing research.”

A Look at the Numbers

Perhaps the most significant fact about this data, as it concerns future trends, is that both total consumption due to population growth and per capita consumption are rising. It is, Imhoff said, non-linear growth.

While plant production itself varies from year to year, mostly depending on weather, the demand trends are holding steady on the increase. Depending on region, some of the increase is due simply to population growth — more people consume more food, more paper, more wood for burning. This has been seen in places like India, where population is booming but individual consumption levels when averaged over the entire population have not dramatically risen, yet. In other places, where economic growth has allowed for more “westernized” consumption, per capita consumption is driving the trend. And in some places, such as North America and China, both population and per capita consumption are increasing.

Already there are great discrepancies in how different regions of the world consume plants for products. The average North American consumes about six tons of plant-based carbon each year, while the average South Asian consumes just a little more than one ton of plant-based carbon each year, Imhoff said. Some of the differences driving this gap could be more material used for product packaging and a greater reliance on a meat-based diet, which requires intensive plant agriculture to feed livestock, in North America. Another potential contributor is the uncertainty in reporting. Consumption is estimated by the products consumed and these are often under reported in some developing countries.

An illustrative example of the impact of population growth combined with increased personal consumption habits: If, in several decades, each person on the planet consumes at the current rates of North Americans, we will require more than 50 percent of Earth’s plant production each year, Imhoff said.

Implications for consumption at that level do not constitute a “doomsday” scenario, Imhoff said. Too much remains unknown about how the climate could change, how agricultural practices could change and simply how the planet’s ecosystems would respond to that level of impact. But the trend does point toward a future of a far more managed planet.

“We’ve gone from 20 percent demand to about 25 percent demand in 10 years,” Imhoff said. “People worry about that percentage. If, in future scenarios, it’s going to go up to something like 50 percent, we’re looking at a very high demand for land management at all levels on the landscape globally. We would be heading toward a place where the planet would be very carefully managed, from end to end.”

As more wild, natural ecosystems would be replaced by managed, monoculture, intensive agricultural systems, the planet would likely lose biodiversity. And as the population grows and becomes more dependent on those managed systems and a long-range food and product distribution network, many populations would become more at risk to perturbations to those systems, such as drought. Already, some densely populated urban areas consume more than 30,000 times the nearby regional plant production.

The foundation for all this research is an accurate accounting of the global plant production each year. The research team gathers this data from NASA satellite sensors. The record, which can act as a baseline going forward, now stretches from 1982 to 2007 and is provided for the earlier years from Advanced Very High-Resolution Radiometer (AVHRR) sensors and in more recent years from Moderate-Resolution Imaging Spectroradiometer (MODIS) instruments.

In itself, these maps of plant production — called net primary production, or NPP, in the science literature — provide insights into how weather, climate patterns and in some cases government policy affect plant growth, said Ramakrishna Nemani, a research scientist at NASA Ames Research Center, Moffett Field, Calif., who has worked on the mapping.

Annual variations in precipitation and weather are readily apparent in the data, which essentially captures the greenness of different grassland, forest and other landscapes as a measure of their productivity. This measure is combined with relevant weather data, such as sunlight and precipitation, to create an index of global vegetation growth. But, Nemani said, decadal, climate-driven variations also appear in the data, although these remain less well understood. In some cases human decisions make their mark, such as changes to irrigation policy in India in the 1990s. After Indian policy-makers removed subsidies for expanding irrigation, the satellite instruments immediately detected a decline in plant growth, Nemani said. As plant production there has leveled off, population has grown dramatically, Nemani said, making it somewhat of a test case for how societies could deal with changes to this supply-demand relationship.

The satellite data also reveals the extent and severity of the impacts of droughts, heat and cold waves, and how fast the ecosystems recover.

Goddard scientist Robert Wolfe uses the “spaceship Earth” idea to compare this research to another NASA role: Figuring out the essential needs and impacts of humans in a spacecraft. How much food and other products are needed? What happens to the waste? Where will the energy supply come from?

These are all questions addressed by this research as our “spaceship Earth” hurtles through space, Wolfe said.

“The human population is big enough now that it can have a substantial impact on Earth,” Wolfe said. “These analyses are really helping in that area. And I think what we’ve done over the last ten or fifteen years is really improve the data we have from space.”

A number of variables could change the current plant consumption trend: agricultural advances such as genetic engineering, climate change, or, less likely, drastic changes in consumption habits. For now the team’s goal is to continue to observe the Earth’s production and human demand for it as closely as possible.

This entry was posted in Land Use, Science by mdelapa. Bookmark the permalink.