CORPORATE social responsibility efforts have always struck me as the modern equivalent of John D. Rockefeller handing out dimes to the common folk. They may be well-intentioned, but they often seem like small gestures at the margins of what companies are really trying to do: make money. 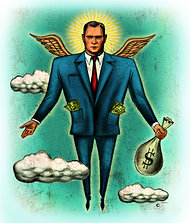 As well they should, an argument most famously made by the Nobel laureate Milton Friedman decades ago. He called social responsibility programs “hypocritical window-dressing” in an article he wrote for The New York Times Magazine in 1970, titled “The Social Responsibility of Business Is to Increase Its Profits.”

But Michael E. Porter, a Harvard Business School professor, may have an answer to the Friedman principle. Mr. Porter is best-known for his original ideas about corporate strategy and the economic competition among nations and regions. Recently, however, he has been promoting a concept he calls “shared value.”

Earlier this year, Mr. Porter and Mark R. Kramer, a consultant and a senior fellow in the corporate social responsibility program at the Kennedy School of Government at Harvard, laid out their case in a lengthy article in the Harvard Business Review, “Creating Shared Value: How to Reinvent Capitalism — and Unleash a Wave of Innovation and Growth.” Since then, Mr. Porter and Mr. Kramer have been championing the shared-value thesis in conferences, meetings with corporate leaders, and even a conversation with White House advisers.

Shared value is an elaboration of the notion of corporate self-interest — greed, if you will. The idea that companies can do well by doing good is certainly not new. It is an appealing proposition that over the years has been called “triple bottom line” (people, planet, profit), “impact investing” and “sustainability” — all describing corporate initiatives that address social concerns including environmental pollution, natural-resource depletion, public health and the needs of the poor.

The shared-value concept builds on those ideas, but it emphasizes profit-making not just as a possibility but as a priority. Shared value, Mr. Porter says, points toward “a more sophisticated form of capitalism,” in which “the ability to address societal issues is integral to profit maximization instead of treated as outside the profit model.”

Social problems are looming market opportunities, according to Mr. Porter and Mr. Kramer. They note that while government programs and philanthropy have a place — beyond dimes, Mr. Rockefeller created a path-breaking foundation — so, increasingly, does capitalism.

The shared-value concept is not a moral stance, they add, and companies will still behave in their self-interest in ways that draw criticism, like aggressive tax avoidance and lobbying for less regulation. “This is not about companies being good or bad,” Mr. Kramer says. “It’s about galvanizing companies to exploit the market in addressing social problems.”

The pair point to promising signs that more and more companies are pursuing market strategies that fit the shared-value model.

Several years ago, executives at General Electric began looking across its portfolio of industrial and consumer businesses, eyeing ways to apply new technology to reduce energy consumption. They were prompted by corporate customers voicing concerns about rising electrical and fuel costs, and by governments pushing for curbs on carbon emissions.

The result was G.E.’s “ecomagination” program, a business plan as well as a marketing campaign. In recent years, the company has invested heavily in technology to lower its products’ energy consumption, and the use of water and other resources in manufacturing.

To count in the program, a product must deliver a significant energy savings or environmental benefit over previous designs. G.E. hired an outside environmental consulting firm, GreenOrder, to help in measuring performance. To date, more than 100 G.E. products have qualified, from jet engines to water filtration equipment to light bulbs. In 2010, such products generated sales of $18 billion, up from $10 billion in 2005, when the program began.

“We did it from a business standpoint from Day 1,” says Jeffrey R. Immelt, G.E.’s chief executive. “It was never about corporate social responsibility.”

Technology has opened the door to markets that have shared-value characteristics. For decades, I.B.M. sold its computers, software and services to city governments around the world, though mainly for back-office chores like managing payrolls. But the Internet, the Web, electronic sensors and steady advances in computing have helped transform I.B.M.’s role, as it now helps cities track and analyze all kinds of data to improve services.

“We’ve moved from the back office to the core mission of cities — managing traffic, monitoring public health, optimizing water use and crime-fighting,” says Jon C. Iwata, a senior vice president.

I.B.M. is now working with about 2,000 cities worldwide as part of its “Smarter Cities” business, which began three years ago. One advanced project is in the sprawling city of Rio de Janeiro, where I.B.M. is designing a computerized command center. It is intended to pull data from dozens of city agencies, as well as weather stations and webcams. One assignment is to closely track heavy rainfall and to predict its impact — where flooding might occur, how traffic should be rerouted, and what neighborhoods may need to be evacuated. The goal is to predict and prepare for the kind of mudslides and floods that killed hundreds of people in April 2010 and left 15,000 homeless.

The cost is relatively inexpensive for Intuit, as the service exploits the efficiency of online distribution; the charge for paying customers is $20 to $50. And the program blurs the line between charity and marketing, because millions of people who are sampling the company’s product, may well become paying customers as their incomes rise.

In India, Intuit has begun offering a free information service for farmers that can be accessed on any cellphone. Part-time workers check crop prices at local markets and send the information to Intuit. The company then relays the latest, local price quotations in text messages to subscribing farmers. As a result, the farmers can make smarter decisions about when and where to sell their produce.

The service in India began last year, and 300,000 farmers now use it. In follow-up surveys, farmers report that their earnings are up 25 percent, says Scott Cook, the founder of Intuit and chairman of the executive committee. The company, he adds, is testing ways to make money off the service, perhaps with text ads for simple tractors and fertilizers.

Mr. Cook points to other new business forays that are part of the same strategy. One is an Intuit health debit card for American small businesses that want to pay for some of their employees’ medical care but cannot afford conventional health insurance.

“We look for places we can use our strengths as a company to help solve big problems,” he says. “You can call that shared value if you like. But I look at it as the business we’re in.”

A version of this article appeared in print on August 14, 2011, on page BU3 of the New York edition with the headline: First, Make Money. Also, Do Good..